Jason Voorhees Is Not a Deadite

Jason Voorhees Is Not a Deadite 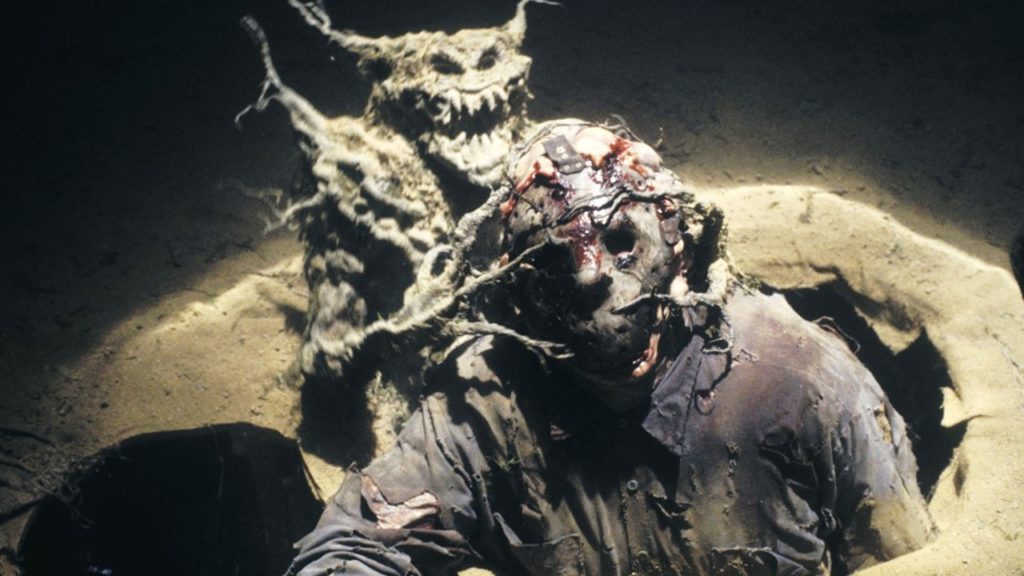 The series has seen Jason come back as a Revenant Zombie in Tom Mclaughlin amazingly directed and written Friday the 13th Part  6: Jason Lives and so throughout the next 3 films it was Jason Goes To Hell which directed a new shift within the established lore...now Adam Marcus was young during this movie he directed and he was a fan of both Friday the 13th and the Evil Dead and he wanted to try to connect two franchises that were simply NOT connected at all and this post is here to explain how Adam Marcus connections aren't even closely logical to Jason being a Deadite or even part of the Evil Dead series.

People have been claiming or stating Jason is a Deadite for years without any evidence or logic to it...so this post will answer "Is Jason a Deadite?" with both evidence from the films and from interviews! ENJOY!

This is from Adam marcus own interview about and for Deadite Jason with Keywords being in Italic format....the first one is from November 2, 2017 where Bloody Disgusting had an article titled ‘Jason Goes to Hell’ Director Says Jason is Canonically an ‘Evil Dead’ Deadite! with Adam stating this.....

Adam Marcus wrote:“I wanted to create a mythology for Jason in this movie, because it had driven me nuts as a viewer,” (Marcus explained, speaking specifically about Jason magically growing from a small boy to a full-grown, unstoppable monster in such a short period of time.) “She [Pamela Voorhees] makes a deal with the devil by reading from the Necronomicon to bring back her son. This is why Jason isn’t Jason. He’s Jason plus The Evil Dead, and now I can believe that he can go from a little boy that lives in a lake, to a full grown man in a couple of months, to Zombie Jason, to never being able to kill this guy. That, to me, is way more interesting as a mashup, and Sam Raimi loved it! It’s not like I could tell New Line my plan to include The Evil Dead, because they don’t own The Evil Dead. So it had to be an Easter egg, and I did focus on it…there’s a whole scene that includes the book, and I hoped people would get it and could figure out that’s what I’m up to. So yes, in my opinion, Jason Voorhees is a Deadite. He’s one of The Evil Dead. It absolutely is canon.”

Firstly...His viewpoint of "Jason magically growing from a small boy to a full-grown, unstoppable monster in such a short period of time." is illogical and you are asking how?...well Jason was 11 years old when he "drowned" in 1957 this is an established time! and Jason Voorhees was born June 13, 1946 so let's go to 1979 when Pamela is on another killing spree and gets killed.....1984 is the timeline of Friday the 13th Part 2! so let's add this up 1946 to 1979 means Jason is 33 years old! and about the time of 1984 which is 5 years AFTER part 1 Jason is 38 years old.....so there is nothing "magical" it's Jason growing up NATURALLY.

Now at the shot period speaking of when Jason becomes so inhuman....to quote Tom Mclaughlin the Director and Writer of Part 6 Jason Lives is established Jason is UNDEAD (Specifically a type of Undead so see "What is Jason?" part of this thread for a full rundown of what Jason is!) is stating Jason Father (Not ELIAS!) is the reason why Jason is so "Supernatural" because of his Father Genetic's and the reason he is quote on quote "evil" and to quote the novel of Friday the 13th Part 6 back cover summary is.....

Friday the 13th Part 6: Novel Summary wrote:A hideous creature who will stop at nothing in a soul-chilling battle to the death...Something unspeakably evil suddenly attacks and snuffs out the life of a horrified young graveside visitor...Two college students come face-to-face with blood-curdling terror in their last moments alive...A silent masked figure mercilessly stalks a beautiful camp counselor through blinding woods until she smashes into a screaming dead end...Jason, the mysterious boy, possessed of the devil's power, has been laid to rest, and the inhabitants of a small New England town shudder with relief. The evil Jason is rotting in his coffin... they think. But his ominous shadow rises again... consumed by a furious and overwhelming compulsion to kill... and kill... and kill...

If you read the lines of "Jason, the mysterious boy, possessed of the devil's power." if you ask Part 6 Jason lives about Jason "real" father (Not Elias Voorhees as established in Part 9 which contradicts the original story of the novel/storyboard of the movie) and if you play Friday the 13th the Game and listen to the Pamela Tapes it's describing Jason father who "raped" Pamela stating he had eyes filled with hate (and evil) and they were "red" hinting at some point Jason is indirectly the Son of the Devil or someone who is related to EVIL and if you look at Savini Jason origin it has Jason beating or killing "Lucifer" himself for his "Trident" hinting a lot about this but yet Jason is not a "demon" either!

To also stay on the topic of the Interview.....Adam Marcus states...
"It’s not like I could tell New Line my plan to include The Evil Dead, because they don’t own The Evil Dead. So it had to be an Easter egg, and I did focus on it…there’s a whole scene that includes the book, and I hoped people would get it and could figure out that’s what I’m up to. So yes, in my opinion, Jason Voorhees is a Deadite. He’s one of The Evil Dead. It absolutely is canon.”

Now, this is the major 100% contradiction to the He stated "In his opinion" and mentions it had to be "easter eggs" because the New Line Cinema DID not own the rights to the evil dead and then he says "Jason Voorhees is a Deadite. He’s one of The Evil Dead. It absolutely is canon." which is not a FACT it's the OPPOSITE of what CANON is! this is completely wrong! and so let's get into the 2018 given interview with SYFY WIRE...

SYFY WIRE wrote:What is the backstory link you crafted to the Evil Dead franchise?

Adam Marcus wrote:When we were pre-producing the movie, Bob Kurtzman and the guys at KNB said we're gonna do the effects on the movie. So I got to go on Sam Raimi's set for Army of Darkness. I asked Bob if Sam would lend me the Necronomicon for Jason Goes To Hell. I let Bob in on my secret plan and knew I couldn't say Deadite or Evil Dead in the movie because Universal owned the rights. If I just take that prop and put it in the Voorhees house, and use the Kandarian dagger as the thing that kills Jason, what I'm doing is setting up a mythology that Jason's mom wanted her so back so badly that she made a deal with the darkness. So she reads from the Necronomicon and brings about the resurrection of her son, so now the fact he lived at the bottom of the lake and grows two feet makes sense.

Notice how Adam Marcus states he couldn't say Deadite in the movie....which is strongly hinting 0 connection to the Evil Dead,and he tries to state he is creating a Mythology....when there was one already established....which contradicts that as well....then he contradicts his own interview from 2017 by stating "She [Pamela] made a deal with the darkness." so which is it? Devil or the Darkness? because it's getting confusing! and then this statement....."So she reads from the Necronomicon and brings about the resurrection of her son, so now the fact he lived at the bottom of the lake and grows two feet makes sense.".....so many holes which will be addressed!

No Links Between Friday the 13th and the Evil Dead

Since the Necronomicon/Kandarian Dagger are just props.....ONLY PROPS as Adam Marcus himself stated they are just EASTER EGGS! now if you are thinking "Easter eggs are canon." then....you are purely wrong as Easter egg are an intentional inside joke, hidden message or image, or secret feature of a work but aren't canon! (Unless the COMPANY says otherwise! and not the actual director! this is due to licensing issues and etc.)

The lore of Jason Goes to Hell: The Final Chapter attempts to retcon all majority given lore from previous films/novels......
Part 2 establishes/hinted that since Jason didn't truly drown and that he GREW UP.

Part 6 film/novel establishes/hints that Jason was BORN supernatural even after being revived which explains how he survived so many life threating events and came back to life.

1. Tommy Jarvis and Voorhees Bloodline: It's established in the film itself by Duke that only a VOORHEES can kill a VOORHEES what does this mean?....this logically means Tommy Jarvis SHOULDN'T have been able to KILL Jason back in Friday the 13th Part 4: The Final Chapter and that all Voorhees are Illogically "Immortal" meaning if Elias Voorhees "IS" Jason father by BLOOD then Pamela "Killing" him is not POSSIBLE! creating a PARADOX! and you are asking how?....why would Elias the dagger that can kill him in his house?....Pamela last name wasn't VOORHEES until she MARRIED Elias!

2. Elias Voorhees: It's established Elias was murdered....so how can he cheat on Pamela and have a kid a few years later?.....

3. Ash Williams, Pamela Voorhees, and the Necronomicon: Fans of the Evil Dead series would know Ash Williams BURNT the Necronomicon before Jason was even born! so how could or can Pamela even read from a book that was long destroyed?! this is a MAJOR disconnection of Jason ever being a DEADITE!

It's pretty much 100% establish that Jason X (aka Friday the 13th Part 10) and Freddy Vs Jason DOESN'T follow anything from part 9, not even the fact Jason is DRAGGED into hell but yet in both movies there are 0 signs that he even came back from Hell! since Jason X establishes they CAPTURED Jason in a sorta "prequel" to Freddy vs Jason when Jason rises from the lake and where Jason was a corpse in the movie who was revived by Freddy!

Differences between Jason Voorhees And Deadites

The major difference between Jason and a Deadites?.......
Jason Voorhees: Doesn't talk and his personality is linear and overall non-existing, His only powers are Super Strength, Super Durability, Teleportation (See Part 7/8), Shifting (See Part 6/7/8), Nigh-Invulnerability, and Regeneration, and the one-time ability of "Possession"

Deadites: They taunt their prey by using their fears and desires and they love to do Self-Mutilation and they overall have a personality and the ability to talk while their powers are common with shapeshifting, superhuman strength, inconstant durability, shifting, flight, mutation, possession and other abilities like a hive mind since they say "We" instead of I.

If you can tell by these known facts...Jason acts and is nothing like a DEADITE absolutely 0 connections to the evil dead series!

Looking back at Friday the 13th Part 6: Jason Lives we see clearly Jason is an Undead entity....a Zombie...but what type of Zombie doesn't eat Flesh? doesn't crave Brains?.....easy to answer the question...Jason Voorhees is a Revenant Zombie and what is a Revenant Zombie?

Definition wrote:A revenant is a sentient creature whose desire to fulfill a special goal allows it to return from the grave as a creature vaguely resembling an intelligent zombie or jiangshi (Vampire).

Jason is a Zombie that holds their intelligence and personality Jason is back as a being full of revenge and hate and unfinished goals!

Jason Voorhees is not a Deadite! 0 Evidence! 0 Connection! and 0 Logic behind it! Adam simply wanted to create something that was impossible! even as Friday the 13th Franchise on twitter stated directly it was simply his own "Fanservice" for the series.